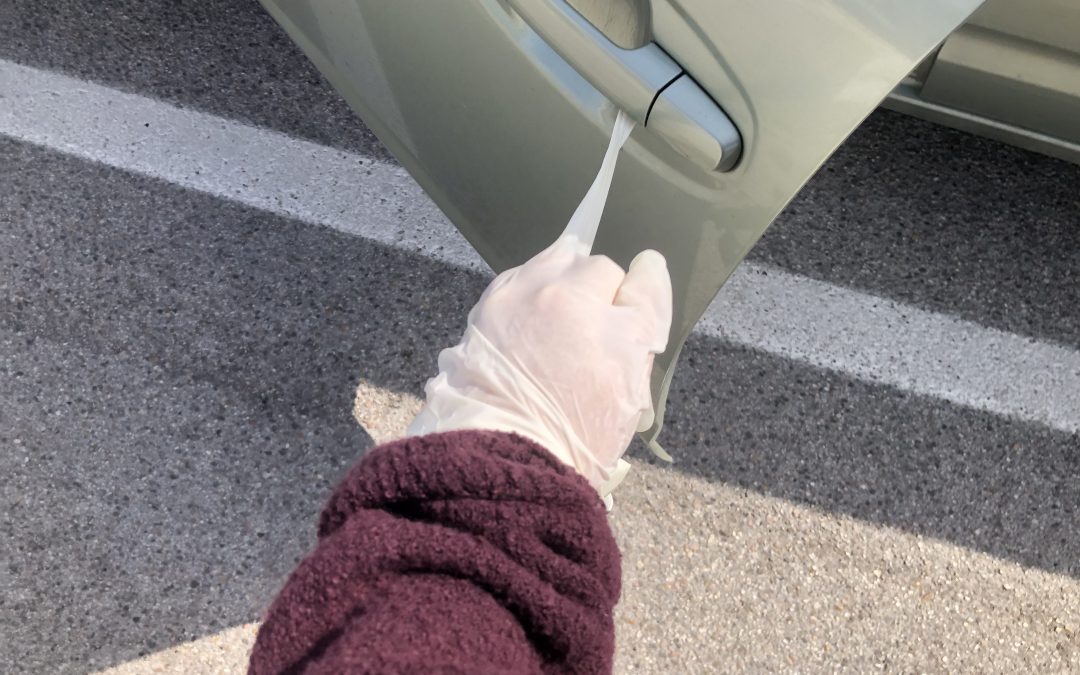 Today was our weekly grocery shopping day. My third time out past our gate in nearly six weeks and I’m exhausted, it was like going on a mission to Mars.

First challenge was to find the hair dryer rather than let my hair dry naturally, Corona virus is serious but going out with wet hair is probably more risky in the eyes of Italians. Second challenge is to find a bra, I haven’t worn one since my last outing to the shop over a week ago. Third thing is get my gloves and mask, we only have gloves in one size, large so no matter how I try to make them fit I have flappy bits at the tops of my fingers. Then we get the shopping bags and get our carefully prepared shopping list.

We need our passports and our self certification forms.

Keys, wallet, phones and we’re off. Except we’re not. The car hasn’t been used in a week and has an old battery which is now flat. So it’s put on a charge. We both go back into the house and let our adrenalin subside over a cup of coffee.

We get going just before lunch. Only one person per family is allowed into the shop.

As I’m approaching the trolley bay I see another two people getting out of cars heading towards other trolley bays. It’s hot and there are already six people in the queue so I speed up. One of the other women sees me and is thinking the same, we’re now both doing fast trots to our chosen trolley bay.

I have my XXL gloves on and I get to my trolley bay first, insert the coin into the trolley release and one of my flappy bits gets stuck in the slot but I keep going wrangling the trolley out of the bay. My phone starts ringing. I see the others are gaining on me time wise, I am closer but I don’t want to be obvious and sprint to the queue so I decide… to skip. I haven’t skipped in 40 years but hey I’m skipping along into the queue, everyone is looking.

I get to the ticket dispenser just before the other woman and grab my number ’27’. Masked and sunglasses on, neither of us can read each other’s expression. My phone is buzzing again, my flappy bit is still trapped, my dust mask has moved up my face to mid way under my sunglasses and is sticking in my eye. It’s 22 degrees and I’m wearing a wool jumper, I hadn’t really thought my wardrobe choices through. I finally get my glove released without loosing a rubber finger. I pull the mask down to get some air and to save an eye. This in turn yanks my hair the elastic has entwined around on the back of my head. Phone is ringing again. I open the phone cover to see it’s my mother. I try to answer but of course with the rubber gloves on the phone won’t take my thumb print ID nor will slide to answer work. I’ve missed an earlier call from her too I notice, she’ll have to wait.

Just at the point I am thinking I am going to start melting in my jumper, my number is called.

First stop the veg aisle. They’ve great walnuts here, perfect for banana and walnut bread. Bag them, weigh them, take the label and stick on bag but now my flappy bit is stuck on the label and the bag. I automatically try to release it with the other hand and now I have flappy bits of both hands stuck on the label. I’m now standing shaking a bag of clacking nuts attached to my flappy bits, sunglasses fall back on nose, I pull my hand away to push glasses up while thinking ‘Don’t touch face’, bag rips nuts fly all over the place.

I give up we don’t need nuts that much nor any other veg that requires labelling. I grab pre packed and labelled fruit and veg and some frozen. It’s like being on Trolley Dash – concious there are 10 people waiting to come in and only five people are allowed into the shop at any one time so I’m rushing around getting everything on the list. My phone starts to ping continuously. I’m picking up more things that are not on the list than that are on the list. There’s really fast music playing, do they do that on purpose to speed us up? Ping. Ping. I’m thinking I don’t want to have to do this again next week so I’m buying double of everything. By the time I reach the wine aisle I’m loading bottles into every conceivable space left. Ping, ping. We have enough, I’ve had enough.

I’m in the pay queue. Ping. Number 28 reaches the queue just after me, she only has a few things so I wave her on in front as is customary in Italy. Ping. Well that was a wasted rush, I’m thinking she’s probably looking a bit smug under her perfectly fitted surgical mask. I’ve been using the same builder’s dust mask for all shopping trips and it’s on it’s last legs.

I check my phone, the pings are from a relative who has found pics of when we were young and has decided to send all 16 of them during my shopping trip.

My phone is ringing, I can see on the screen it’s my mother again. Anxiety is rising, something must be wrong. Ping, ping. I pay for the avalanche of shopping and exit as quickly as possible. I hear Ronan before I see him, revving the engine like it’s a getaway car, masked and gloved adds to the feeling we are doing a bank hoist rather than a grocery shop. My phone is ringing as I load the shopping bags into the back of the car. “Oh for f**k sake!” I mutter into my smelly mask.

Ronan sensing I’m distressed over something, gets out to give me a hand, not thinking about the flat battery. “NOO stay in!”, I shout slamming the door.
My flappy bit get’s caught in the door handle as I am saying “Go, go, go, keep the engine running”.

He jumps back in, starts the dying engine.. and automatically drives off?… my flappy bit still attached. It stretches about a foot and then pings off my hand. ‘Ping, ping’ goes my phone. I steer the trolley back to the bay with my elbow and my covered hand where fairy pools have now gathered at the top of my flappy bits. Husband cruises the car park and comes back for me. I’ve picked up the coin with my uncovered hand. Crap, I’ve fallen at the last hurdle.

We have hand sanitiser in the car and so I dose my hands and my phone in it. At this point I have missed six calls in the space of 30 minutes from my mother, so my shaky hands slide all over the phone trying to call her.
“What’s wrong?” I ask, skipping the greeting.
“What’s wrong?” she responds.
“What? You called me six times.”
“I called you six times ‘cause you didn’t answer so I was worried something was wrong. Nothing is wrong here, what’s wrong with you?”
“Nothing is wrong here either. I’m out shopping I’ll call you later.”
I’m a bit annoyed, “Honestly, I thought as an adult I wouldn’t need to tell my mother whenever I left the house, especially as I live in another country.”

Bloody hell, that was so stressful. I’m glad that we are home and have enough to eat to last probably two weeks so I won’t have to go out again. While himself unpacks, I call my 23-year-old daughter in London and wonder why she isn’t answering… so I call her a second time… and a third. “I was in the shower, why are you calling so much, what’s wrong?” … And that is when I realised I had turned into my mother.