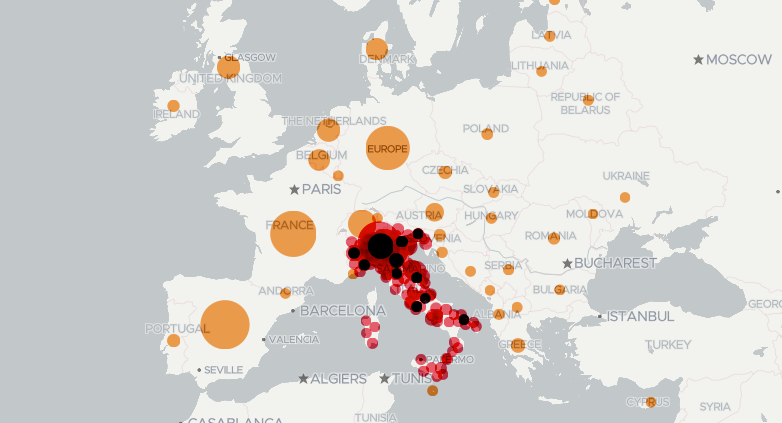 This is the map I look at every morning. I look at the stats waiting for the day when the percentages go into minus figures. Poor Italy looks like a squashed lady bird at the moment, I will never look at polka dots the same way.

There’s a real advantage to not being fluent in the language of the country I am living in as I can’t understand what is being said on the radio or by politicians. So I look at my little squashed ladybird map every day and listen to the Irish or Sky news in the evening and that is my news in take for the day. I think it’s good for everyone to limit it at a time like this, as being bombarded by negativity all day just causes anxiety and depression. One news blast and then carry on with your day.

I know a lot of you are concerned about us over here in Italy, but I have to say I am more comfortable being in Italy more than anywhere else in the world during this Corona Virus pandemic and here are five reasons why:

1. Italy Is Self Sufficient

There is no ‘run’ on grocery shops like other countries, even though we are in the eye of the storm, and even if the shops still run out of food they know how to whip up a great meal from what is around them.

I often take the train into Florence or down to Rome I live in between both, I’m quite voyeuristic when it comes to looking in back gardens. And something I have noticed is there are no flower gardens – flowers are kept to terraces, gardens are for vegetables. Each plot has rows of courgettes, artichokes, potatoes, cabbages, tomatoes, lettuce. Along with peach, orange, apple, pears, cherry, figs and of course grapes. All with different fruiting seasons.

The shops are full of local produce rather than imports. They have wheels of aged cheeses and joints of aged hams.  ‘Baccalà’ – salted fish – is still a staple food, originating as a way of preserving fish from the time of long sea voyages and pilgrims walking the roads to Assisi.

There are aisles of wines but they are all from Italian vineyards. You won’t see an Aussie or South African Chardonnay anywhere. Processed food and imported food is minimal.

Wartime survival instincts are still strong – it is still common to see old people with rickety legs from the time they were children of the war hiding in the mountains and all they had to eat were the nuts and weeds they could forage. At this time of year in the woods near where I live, you will see men (mostly), with a bag full of wild asparagus they have just collected. The use of pesticides or weed killer seems to be frowned upon. They know how nutritious and delicious some weeds can be, they know their mushrooms, roots and nuts.

2. They Love Their Nonni

They put their citizens before economy – They love and respect their nonni (their grandmothers and grandfathers). Many people still live in houses divided into apartments which is shared between three generations. In every town you’ll see groups of old gents playing cards outside coffee bars. In many town centres they have converted an empty shop to a place where the elderly men can gather to read the paper, chat, play cards, have a coffee. The women stick to the benches, balconies and church steps for their chats. Old people here don’t suffer from loneliness as much as other countries, they are loved and respected. They have put these citizens before the economy and have done all it can to curtail the spread of this virus in order to protect their elderly. This is why the Italians are not putting forward arguments against the quarantine, or other extreme measures, even though their businesses or jobs are in jeopardy.

Italians are very careful of their health, there’s a thing they fear called ‘colpo d’aria’ which means ‘a blast of air’, the closest Irish equivalent is ‘catching a draft’ or ‘getting a chill’ but ‘colpa d’aria’ is more serious. I’ve had friends who blame stopping during jogging to read a text on stomach sickness caused by ‘colpa d’aria’ or getting pains in their joints caused by ‘colpa d’aria’ after working out and not cooling off properly before going into an air conditioned supermarket. Air conditioning is frowned at – recycled cold air? no thanks.  They wear their scarfs and overcoats until after Easter even if it’s 20 degrees. Going out with wet hair is a near criminal offence. Every house has a thermometer that is regularly used to ensure no one is close to getting a fever in winter season. If your temperature goes up in any way, a whole series of old wives cures are used. They are very careful about their health.

This is reflected in their health system, even though their economy was struggling before this outbreak, their health care system remained admirable. Even though it is under severe strain now, it is coping with this virus better than other countries would or will.

There is always a cleaning crew on the trains. Not just during the virus. The same with airports, there are always busy cleaning crews.

On a lighter note, a lot of places sell pure alcohol so that people can make their limoncello and other liquors, so if we run out of hand sanitiser we can always make our own AND every bathroom has a bidet in Italy so not only is their bottom hygiene excellent, but running out of toilet paper is not a concern!

Temperatures are on the rise, so like many, I am hoping warmer weather will kill off this virus. However, I am surrounded by beautiful scenery and the Italian’s are very, decent, kind people so even with a raging virus rampaging the country, I still feel very lucky to live here rather than anywhere else.