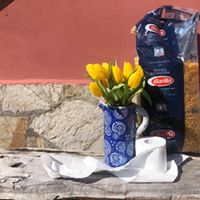 I try to find at least one new positive per day that is coming out of this experience. Here’s my top four as of today:

2. Greta Thunberg will be less stressed – come on, admit it, we all want this to happen! Every time her little face comes on the TV I prepare to be sad. Less planes in the air, less cruise ship pollution, less cars on the road, factories closed, all lead to less crap in the air and in our water systems. It’s Spring, so birds, bees, fish etc., are breeding without human interference. Noise pollution is down. Nature is having a chance to recover. Greta must be feeling a little bit more happy now?

3. Mass Shooters are out of business – think of it, schools are shut, churches are shut, concerts are cancelled so they have no where to go. AND they may now have time to do that online anger management course they were meaning to do.

Let me tell you something, I bought a 5kg bag of pasta here in Italy last September. It was on sale for only €2.40 and I thought – well, I’ll get it incase of an emergency ie. we get a sudden craving, that only a good ragu would satisfy. At the time of buying, I wasn’t expecting that an actual worldwide pandemic would hit us.

After six months we still have 4 kg of the bag of pasta left. These guys have watched way too many zombie apocalypse movies. Seriously, if you get through that much dried pasta in the next four weeks you will be throwing the remainder at your neighbours because you will be so sick of it.

4. We’ve got food (other than dried pasta), water, Netflix, Skype and What’s App – how lucky are we compared to people in previous world disasters?

5. The world is slowing down – We have all got too used to being available 24/7, having instant access to everything, working 60 hour weeks away from our families. This crisis is forcing a lot of people back into their homes, the first days may be filled with anxiety and stress but after a week, they may start enjoying having precious family time or the time alone they have been craving. We’ll have time for proper rest, take deeper breaths, to cook meals from scratch and realise what is important again. We are learning patience.

What other positives can you think of? Please leave your ideas in the comments below. The more bizarre the better.

Pic: My 5kg bag of pasta which is still going strong since last September, some yellow tulips to make you smile … and a toilet roll to make some of you jealous.