To Be: A Cowgirl and Do A City Slicker Style Cattle Drive 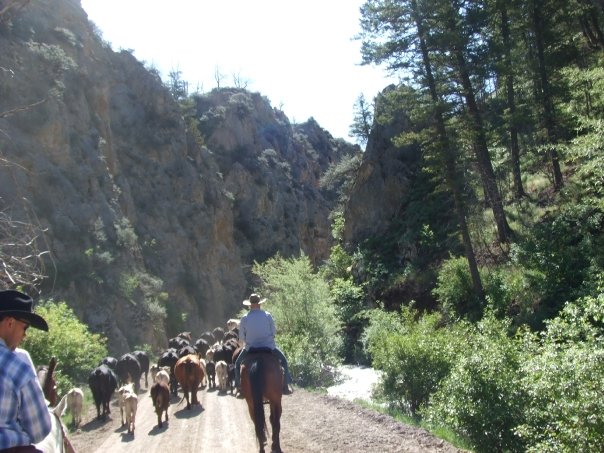 When I was 23, I had my Work Your Way Around the World 1996 in one hand and Pregnancy and Motherhood in the other. All I ever wanted to do was travel and then, I saw him across a crowded cafe and fell in love. He proposed before we kissed and I had already named our ‘to-be’ children. I decided the world would still be there when my ‘to-be’ kids were grown. So I reversed my life plan. Kids before travel rather than travel before kids.

Twelve years, two children and plenty of life drama later, the Pregnancy and Motherhood book was dog eared and circulating amongst friends who were just starting to need it. My youngest was five and able to survive for a week without me. It was time to dust off my travel guides.

I had helped out on a horse riding summer camp when I was 19 in Illinois, and it was something I wanted to try again. So when I saw an advert for a cattle drive in Montana  I said to my friend, ‘Let’s do it!’

Six months  later I was having a panic attack sitting on a plane flying over the Rockies with my friend snoring peacefully beside me. The two other Cattle drive Irish girls, Katherine and Miriam, we met at the airport were also sleeping soundly.  In the 20 hours since we left I hadn’t slept a wink.  The turbulence and exhaustion got at me, I suddenly developed an acute fear of flying and all I could say to myself was ‘What the hell am I doing here? I have two children, if something happens to me they’ll grow up without a mother. I should be more responsible!’. I felt miserable and wanted to go home.

However, one very deep sleep in a comfortable travel lodge in Bozeman Montana and a typical American breakfast of blueberry pancakes, grits, bacon and endless coffee and I was right as rain again, ready to start our adventure.

We were picked up by a yellow school bus and then switched to pick ups about half way and driven to our first campsite about two hours into the mountains. Along the way one of the first thing I noticed was that nearly every man wore a cowboy hat, they weren’t doing it as a tourist attraction, this was their way of life, these were real life cowboys and all very handsome!

Around a campfire where they seemed to burn telegraph poles (this may explain the lack of telephones) all 30 participants were asked to introduce themselves, most were from different US states – there was an ER nurse from NY, a firewoman from Connecticut, an air force pilot from Florida, A young family from Washington, a vet from San Fran, a 74-year-old Harley Davison biker and his 68-year-old wife from Iowa and a stag party from Boston. The international crew was made up of a mother and 40-year-old daughter from theUK, an English man and his son, a German, a Swiss and us the Irish contingent. Most were there because their favourite film was City Slickers or because it was something they always wanted to do.

Discovery 1: I was still able to make people laugh.

The next morning we were split into groups introduced to our group wrangler. Our group of  four  Irish girls agreed there was a God when we were assigned Jeremy, the 29-year-old Chippendale lookalike who was a firefighter when not ranching. We were also matched with our horses and saddles. My three companions were regular riders. Me? I couldn’t even get into the saddle by  myself, which meant poor Jeremy had to practically lift me onto my saddle every morning – a shameful way for a married woman to start the day.

Over the next eight days we drove 300 heads of cattle from their winter pastures to their summer feeding grounds. They need to be moved three times during the summer and the ranch previously  employed the help of friends, neighbours and family to assist moving the herd along the track and keeping them together, then they realised out of towners were willing to pay for the experience and an industry grew around a necessity. The scenery was vast and beautiful, noise from the herd deafening at times as mothers tried to find their calves. Somedays we were riding for eight hours with an hour break for lunch. I stayed mainly at the back where the pace was usually not more than walking or mild trot.

On day three we moved to tents on the homestead, Battle Creek Ranch which meant warm showers instead of the river or wetwipe options of the first camp. There were still portaloos but these were plentiful and clean enough to get used to.

Discovery 2: I could still rough it and enjoy camping.

Out of the saddle, there was always a cowboy ready to teach you the art of lassoing or cracking a whip (easier said than done) and a catering crew who kept us surprisingly well fed with an amazing choice of food for each meal. The evenings were spent drinking, singing and talking around the campfire. This was mainly led by Hal who often sings at home with his good friend Willy Nelson.  On the last night we had a barn dance and man, can cowboys dance! It was country and western all the way and for every song a different cowboy to glide you around the floor. Even Jackson, one of the cowboys five-year-old son put me to shame with his quick step as did his 94-year-old great grandfather. To  ‘Cotton Eyed Joe’ myself and Miriam did our version of Riverdance. All were very impressed and soon I was teaching half of the town, the 1,2, 3s and the Walls of Limerick. Considering I was thrown out of Irish dancing class at the age of eight for my two left feet and inability to master the 1,2,3s, this was quite an achievement.

Discovery 3: I still can’t Irish dance but am a good faker.

My overall memory of the trip was not the aching muscles or the realisation I was rubbish at horseriding. It was the comradeship and constant ripple of laughter through the camp 24 hours a day and crying with  laughter at least twice a day.

Discovery 4: I am still able to make friends without my children being the introductory force.

I came home with great stories, a renewed appreciation for my husband and kids and some great gifts, including a cowboy hat for himself.