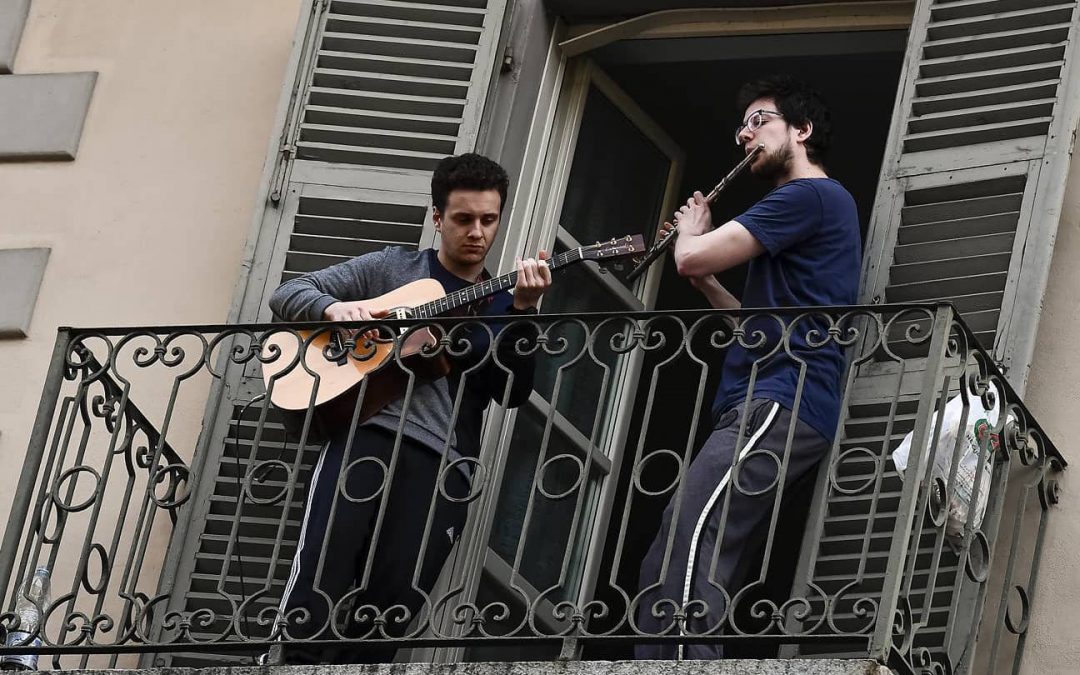 I have a new fear for the world and it’s not the Corona virus. It’s balcony singing.

The Italians have been keeping spirits up by singing and playing instruments from their balconies. It’s beautiful, amazing and the videos of the impromptu concerts are going viral. They have brought tears to my eyes and lumps to my throat.

But something needs to be understood. Italy is the home of opera. Most kids learn a classical or traditional instrument from a young age. Yes, I know most parents around the world give their kids the gift of music from a young age and they work through the grades and do well, but the Italians are different. Every town has it’s Saints days and throughout the summer they have Medieval and cultural festivals, in Autumn towns have a ‘sagra’ which is a festival of the local food and wine harvest. Parades and local traditional music play a big part in all of them.

Kids practice together regularly throughout the year for these regular festivals and continue to participate as adults with the same people they grew up with.

In Italian towns many people live in apartments and a lot of towns have districts that compete against each other during their local festivals such as Siena’s Palio or Gubbio’s Race of the Candles – where three districts carry giant wooden beams to the church on top the hill – don’t ask, it’s fun to see, adrenalin pumping for sure and it all ends with them having a massive street party together. Community spirit is still very strong in Italy.

Many members of these close knit communities live in apartments close together, so when for instance Marco whips out his trumpet on his balcony, Francesca in the apartment two blocks down knows when to join in with her tambourine as she is familiar with his music, and she most probably has played with with him many times before. And so it continues and their impromptu flashmob works out.

My fear for the world is people mimicking this in other parts of the world; garage bands will compete with each other, drummers drumming to their own hard metal beats, wannabes belting out their versions of Whitney Huston and Adele. I’m scared you are all going to be surrounded by a live version of the XFactor reject clips 24/7.

Or people will think they are doing the world a service by playing their Spotify list at top volume in their semi-estate garden, when in fact, a lot of people would prefer to enjoy this God given peace and quiet time.

Be warned and be prepared: skip the toilet roll aisle at this point and stock up on the headache tablets, you could soon be moving on to the music level of the virus.